Chocolate – a delicious Bayonne tradition, an outstanding feature of the town and not be missed! Bayonne is the official chocolate capital of France not only for the quality of its dark chocolate but particularly for its history. Why Bayonne? The obvious answer is the town’s proximity to Spain and its vocation as a port. The first important shipment of cocoa beans from the “New World” arrived in Seville in 1585 and this new drink was known only among a handful of Spanish nobles and, of course, the royal family, by the end of the 16th century.

In 1550, the King of France, Henry II, provided written orders to invite and protect Jewish families from Spain and Portugal, fleeing the Inquisition by crossing the Pyrenees.  As traders they were needed in the Atlantic ports and, at first, were known as “Portuguese merchants” or “New Christians.”

Bayonne, close to the border, was a natural choice, however the locals were e worried about the new competition and immediately restricted the new arrival’s trading activities within the town centre. The Jewish community, nevertheless, were to play a huge role in developing the port.

The Saint Esprit quarter, on the right bank of the Adour, became a mixed Christian and Jewish community (an important Sephardic synagogue, built in 1837, is open for worshippers there today).

The first mention of chocolate, in the town archives, is in 1670 but mentions it as having been bought in Spain.  Was chocolate made in Bayonne at the time? Mystery… However, clear references to the Jewish community making chocolate appear from 1687 and from then on, they rapidly became predominant in the activity.

A few years previously, in nearby Saint-Jean-de-Luz, the royal wedding in 1660, between Louis 14th and the Spanish Princess, Marie-Therese, had ensured the arrival of chocolate in Versailles (even if the king preferred coffee…).

Chocolate drink became very fashionable amongst the trading and business community and, by the middle of the 18th century, not only did Bayonne have the largest Jewish community in the kingdom but more chocolate was drunk in the town than anywhere else in France (the first chocolate bar was produced by Frys of Bristol in 1847).).

By the 19th century, important families were established as chocolate makers (some of whom still carry on the tradition) not only in Bayonne but also in nearby Basque villages. By the middle of the century, there were more chocolate manufacturers in Bayonne than in Switzerland!  Thirty-four were noted in Bayonne in 1854!  Napoleon III and Eugenie, his wife, bought their chocolate from these families during their holidays in Biarritz.

Today, chocolate is an integral part of the town’s character.  Bayonne’s narrow pedestrian streets are blessed with a variety of  local, traditional  shops as well as a few national and  European manufacturers. Drinking hot chocolate is a ritual observed at certain famous addresses either “underneath the arches” in la rue port Neuf or on terraces by the Nive riverside.  Chocolate shops are besieged at Easter and for Christmas with each bringing their own specialities and originalities. 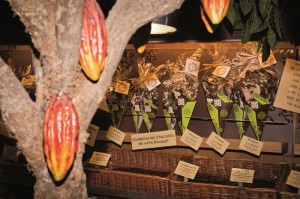 La rue Port Neuf is particularly well-equipped in the chocolate department.  At the height of the tradition in the 19th century, there were six major Bayonne chocolate families in the street. Today, the street’s tradition is still going strong with four, all members of the Chocolate Academy.

“L’Atelier du Chocolat”  (Chocolate workshop) created by Serge Andrieu is instantly recognisable with a (mummified) cocoa tree in the middle of the shop! Their speciality is the “chocolate bouquet”, wafer thin slices of chocolate varities (either dark, milk of white chocolate – the customer may choose their own mixture) presented in a bouquet form.

These sheets, or slices of chocolate, are prepared in the mornings by the ladies who may be admired as they expertly spread chocolate over a cooling marble bench, adding the ingredients as they do so.

Casenave, a few addresses down the street, is famous for its hot chocolate drink “mousseux”, or frothy, as it is hand-whipped – a homage to the whipping baton in the chocolate services of the 18th and 19th centuries. This particular drink is served with  cream (also whipped!).  The chocolate salon is particularly appreciated at Casenave with its Art Nouveau stained-glass decoration (from the late 19th century) creating a special atmosphere. There has been a chocolate shop at this address since 1760!

Daranatz, next door, also retains the original founding family name from the 19th century (founded in 1890) and is renowned for its individual chocolates (up to 50 varieties) including  a ganache (cream and chocolate) interior as well as over 20 different flavours of chocolate bars .  The master chocolate-maker here, Jean Michel Barate, is also the current president of the Bayonne chocolate Academy.

Opposite, the welcome return to Bayonne, since 2003, of the Paries family . The enterprise was founded by Jacques Damestoy, in the late 19th century, who was a chocolate apprentice in this very street!  He created, in 1905, the “Kanuga”, chocolate-caramel sweet, voted by The New York Times in 2002 as the best chocolate-caramel in the world!  The shop also provides a wide variety of individual chocolates as well as light, almond cream biscuit called a “Muchu” or, “a kiss” in Basque.

The most recent member of the Academy is to be found on the quayside of the Nive (close to the Musée Basque), “Pascal”, a young Bayonne chocolate creator(who was an apprentice with all the French masters including Robert Linxe from Bayonne who originated the very first true chocolate shop in Paris, “La Maison du Chocolat” in 1977) who had the origin idea of combining chocolate with jazz music!

The Chocolate Academy was founded in 1994 (?) in order to maintain the high quality of the traditional dark chocolate but also to organize the “Chocolate Days” festival (Ascension weekend, end of May/early June).

On the Friday and Saturday there is free tasting in front of certain shops with the masters coating their specialities with ganache.  There is a chocolate workshop for children ( Andrieu – L’Atelier du chocolat), guided vists and lectures. A chocolate producing country or a famous chocolate city is invited as a guest of honour.

Bayonne is bathed in a chocolate aroma for two days! 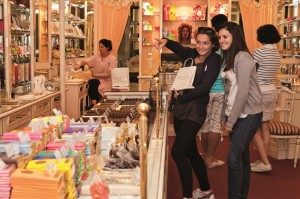