The intimate and cosy nature of the old town is due to both its geographical position and also its military past.

Originally built by the Romans on a small hilltop, overlooking a river junction, Bayonne’s image is one of bridges, arcades and quaysides, sloping and curving streets – there is nothing predictable about the town layout.

Bayonne has always been a fortified stronghold and, up until 1907, was not allowed to expand beyond its walls. Thus today, the historical centre remains compact with sheltered pedestrian streets, lined with stone or half-timbered architecture. The narrow and tall riverside houses are often compared to Amsterdam.
The buildings and façades are today, progressively restored, thanks to subsidies from the State and Town Hall, as Bayonne is listed as a « Secteur Sauvegardé » (protected historical urban area). 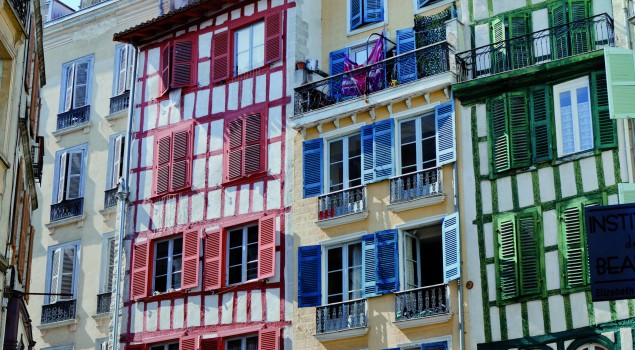 Strolling is easy and pleasant thanks to the projects to convert streets into pedestrian precincts, attracting both shopowners and customers.

Deliveries to the shops are made by « electric bicycles », inspired by the success of the « navette » electric orange buses which provide free transport from the outer parking areas to the town centre.

Its possible  to walk across the breadth of the old town in 10 minutes (personally timed) but hours can be spent exploring the « nooks and crannies », the little town squares and the fortifications overlooking the green belt, which covers 43% of the town area.

There are over 800 stairwells in Bayonne, centuries old.

For instance, go in and take a « gander » inside no .32, Rue Port Neuf (the public are invited via the historical notice in English on the outside) and admire the 19th century, spiral staircase. This divides the building into two distinctive parts – classic Bayonne town house architecture. Almost opposite is the famous chocolate destination of Casenaze. While wallowing in a delicious « chocolat mousseux » ask if you may use the « loo’s » (even if its a fib) and you will be guided to a 17th century stairwell, simpler in style and possibly the oldest in the town. 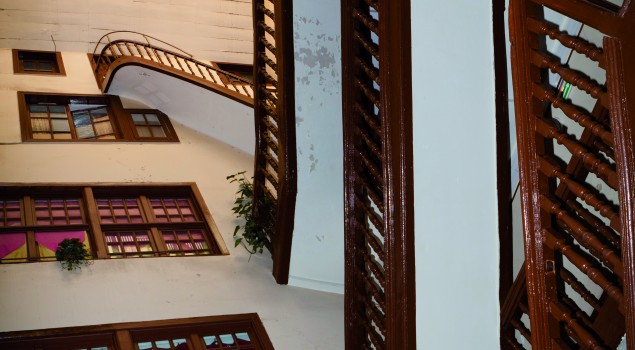 Now for some crooks and nannies….. Walking down La Rue Poissonerie, turn right into the alley of La Rue des Augustins.  The far end is dominated by a Roman tower – 1700 years old ….on the other side is the pretty, Place Plachotte, surrounded by façades from the 17th, 18th and 19th centuries. This little town square was one of the first restoration projects in the early 1990’s.

Stroll up the curving Rue Passemillion to the Rue d’Espagne (the old Roman road and national highway till 1913…) cross over and follow the Rue Vieille Boucherie (old butchers street) to where it meets two others. This delightful intersection is straight out of the Middle Ages….La rue Faures is the former blacksmith’s street (the idea of the bayonet is attributed to the guild) whereas the gascon name, Rue Douer, refers the barrel makers. Note the curious cartwheel embedded in the side of a house – not the result of a high-speed historical accident but a 19th century Cartwright’s shop sign!
Walk through the entrance in the thick Roman wall and cross over the street… and discover a wonderful, wide-angle perspective of Bayonne’s ramparts. 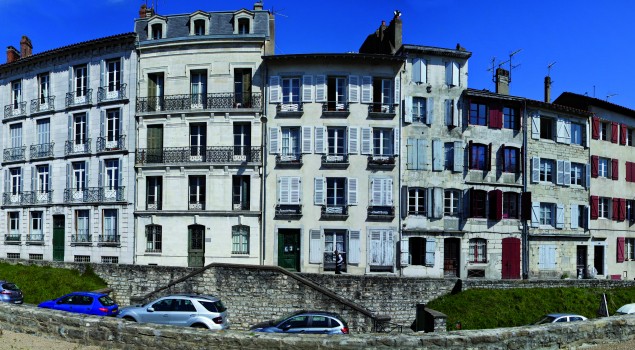 Walking down towards the Nive River, a rugby pitch is overlooked by a 16th century rampart – the perfect historical vantange point for a match!
The Cathedral cloister is always a surprise….one of the most spacious in France and tucked away in the heart of the urban area.
Treat yourself to a meal or a hot chocolate in the Belzunce restaurant, Rue de la Salie and discover the recently restored, 17th century courtyards in the Louis 13th style.

Close by, five pedestrian streets, the « Place des Cinq Cantons », intersect as a commercial hub. On a busy shopping day, its the veritable pulse of Bayonne…

Finally, the classic postcard image but which sums up the town so well, the old canal site « Rue Port Neuf » with its arcades, chocolate shops and the spires of the Cathedral in the background.

Bayonne is one of France’s regional treasures. I come from New Zealand….I’ve lived here for over 30 years and I’m still in love with the magic!